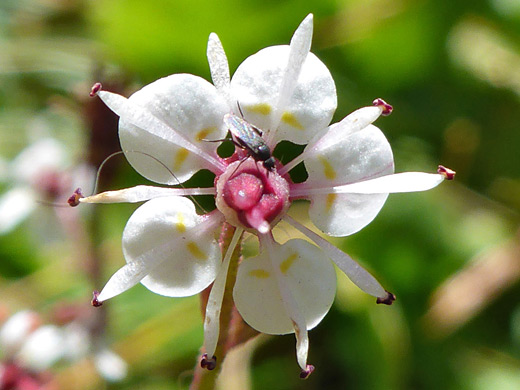 The slender, reddish-green stems of micranthes odontoloma (formerly saxifraga odontoloma) are branched, leafless and somewhat glandular-hairy. Hairs and glands are red. The plant forms open, elongated flower clusters along the upper half of the stem, the heads borne on short stalklets which also branch a few times, and are similarly glandular.

Flowers have an intricate structure: five red, ovate sepals, spreading or bent backwards, beneath five rounded white petals, which are narrow at the base (clawed), and tend to be short-lasting. Petals have two greenish patches at the lower part of the wide section. Petals are bent back below the plane when fully mature. Ten thick white, petal-like stamens radiate out from the middle of the flowerhead, topped by yellow-brown anthers, while at the center is a red/purple ovary, split into two protruding lobes, each with a small style on top. The plant is quite widespread though restricted to moist locations; it is most often seen alongside streams in mountainous areas. 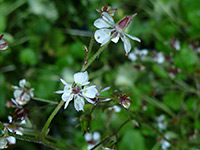 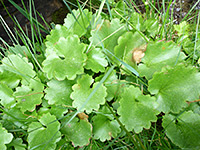 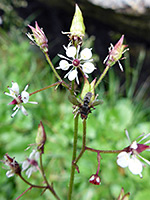 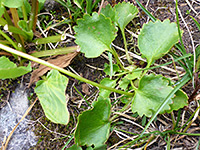 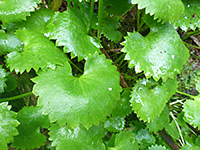 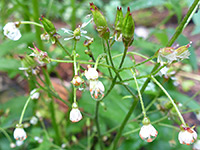 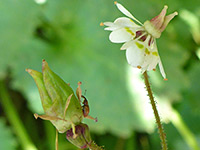 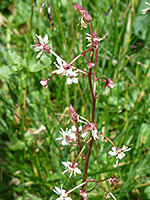 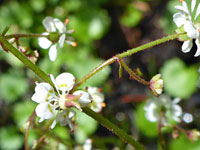