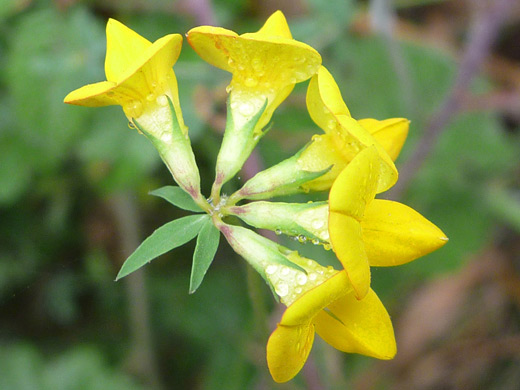 Like another lotus species imported from Europe, corniculatus, lotus tenuis is usually found in disturbed and/or sandy locations, and is most common along the coastline of California and in desert areas of Nevada. The main difference is the leaflets, which are generally thinner, around four to five times longer than the width; those of lotus corniculatus are around two to three times as long. Leaves and stems are generally hairless, though the upper parts of the plant may have a fine covering of strigose hairs. Leaves have a pair of leaflets at the base and three more at the tip.

The inflorescence contains a single flower or up to seven, often arranged all in the same plane, forming a neat semi-circle when viewed from above. The pointed calyx lobes are shorter than the fused section of the calyx tube, another difference from lotus corniculatus. Flowers are all yellow except from a few reddish lines on the banner petal. The cup-shaped wing petals generally stay close together, hiding the inner keel petal. 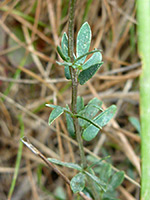 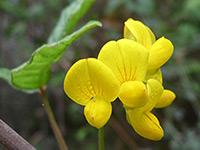