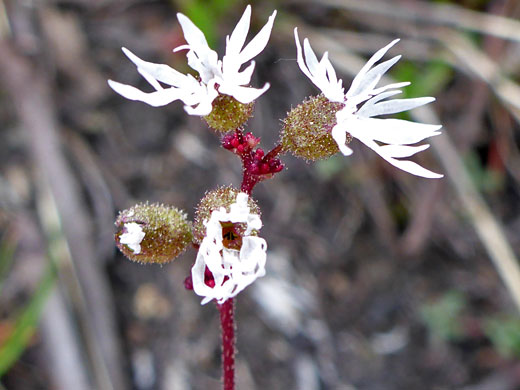 Lithophragma glabrum has a wide distribution across the West, over a large elevation range, resulting in a long blooming period - March and April in coastal areas to July and August in the high mountains.

The common name of bulbous woodland star refers to the reddish bulbils that replace some of the flowers. The actual flowers may be solitary or part of small clusters (up to five); they consist of a bell-shaped hypanthium, hemispheric at the base, and five white or pale pink petals, deeply divided into three or five narrow, differently-sized lobes.

Stems are usually red, and are hairless at the base, sparsely glandular hairy above, as are the pedicels and hypanthia. Stems are unbranched. Leaves grow at the base and at widely-spaced intervals along the stem. Leaves are three-lobed, and those at the base are further divided into three or four segments. The stem leaves, numbering between two and four, may also be accompanied by bulbils. Leaves are attached by petioles of up to 1.5 inches. 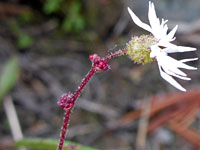 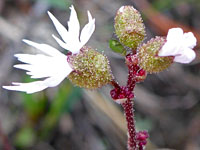 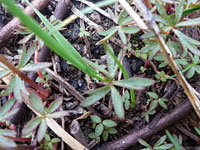