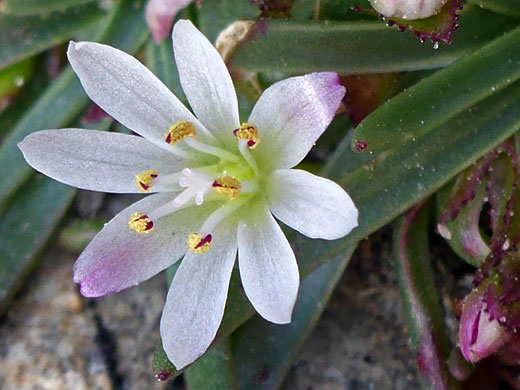 The narrow, linear, greyish-green, fleshy leaves of lewisia pygmaea grow only at the base, in a rosette; they are curved in cross-section below and flattened above. Flowers are produced singly or in small clusters (up to four), on short stalks that have an opposite pair of leaf-like, gland-toothed bracts at or below the middle.

Flowers are formed of between five and nine white (less often pink) petals, often pale green at the base, and two broad, rounded sepals whose margins are lined with purplish teeth topped by small glands, a feature that distinguishes this species from the otherwise very similar lewisia nevadensis. It also has somewhat shorter petals, around 0.3 inches cf. 0.7 inches for lewisia nevadensis. Stamens number from five to eight, and the stigmas from three to six. 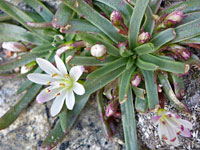