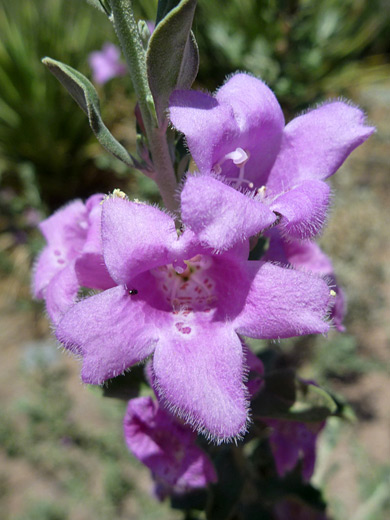 In the US, leucophyllum frutescens is found mostly in south Texas, close to the Rio Grande, but is also reported from Pima County, south Arizona. The plant is a shrub, several feet tall and wide, producing numerous grey-green leaves and showy purple-pink flowers. Stems, leaves and petals are hairy. Because of the abundant flowers, dense foliage and low water requirement, this is a popular landscaping plant for drier regions of the US. The common name barometer bush refers to the flowering, which commonly follows rainfall, when the humidity is high.

Flowers sprout from the leaf nodes, singly; they have five spreading lobes and a slightly crinkled texture, The inside of the corolla tube has a specked pattern; reddish dots on a white background. The corolla is about one inch long. Lobes are hairy, especially along the margins and at the base. The center of the flower contains four white stamens and a longer staminode (infertile stamen). 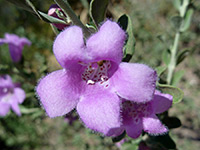 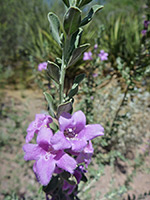