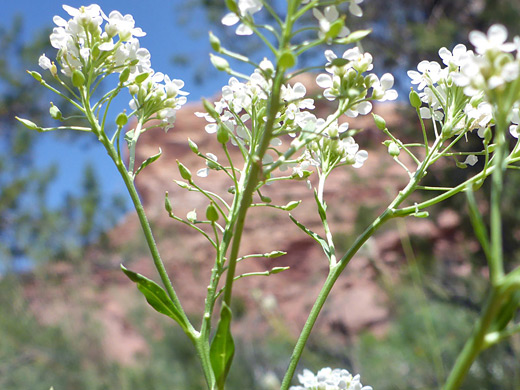 Lepidium eastwoodiae is similar to the more widespread, and more variable lepidium montanum, but is a significantly taller plant, up to 5 feet rather than 1.5 feet, and has stem leaves with (usually) entire rather than lobed edges.

Stems may be glabrous or covered by very short pubescence. Plants produce one stem, which branches mostly along the lower half. The stalked basal leaves are usually withered by flowering; those higher up the stem persist, and are mostly stemless. Stem leaves may be lined by a few large, sharp teeth.

Flower clusters are initially quite compact, becoming elongated at the fruiting stage. The light green sepals are ovate or nearly round, while the clawed white petals are mostly round, and about twice as long as the sepals - up to 0.15 inches. At the center are six stamens, with hairless filaments. Flowers are borne at the end of relatively long pedicels, which at the fruiting stage are held horizontally, or slightly above. Fruits are broad, green, ovate pods, winged towards the tip. 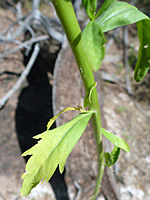 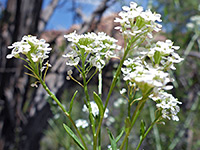