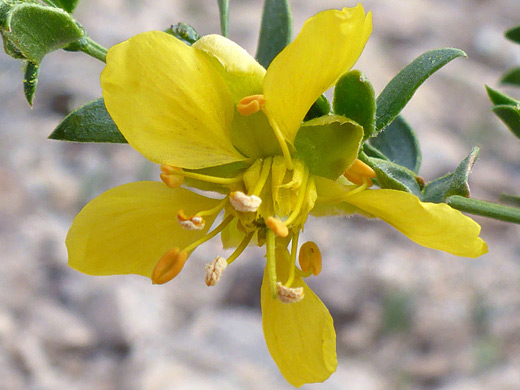 Larrea tridentata, the creosote bush, is the most common shrub of the three hottest US deserts (Mojave, Sonoran and Chihuahuan). Plants can bloom any time of year, following rainfall, though early spring to early summer is the usual time. The common name refers to the greasy smell exuded by the plant, most noticeable during wetter periods. When mature, new bushes are produced from the roots, in a ring around the parent, which eventually dies; by this process the ring gradually enlarges, over thousands of years.

Stems are red-brown initially, soon becoming grey and woody. The dark green leaves are paired; two opposite leaflets, fused at the base, separated by a short spike, which withers early in the season. The leaves are evergreen.

Flowers are attached by stalks of up to half an inch, lengthening slightly at the fruiting stage. Flowers are a little over one inch in diameter; they have five overlapping, ovate, yellow-green sepals, unequal in size, and five clawed, yellow petals, often somewhat twisted. At the center is a ring of ten stamens, alternating with shorter, toothed appendages, resembling the stamen filaments. Anthers are orange, and two-chambered. 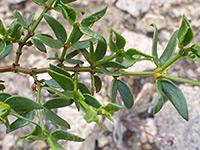