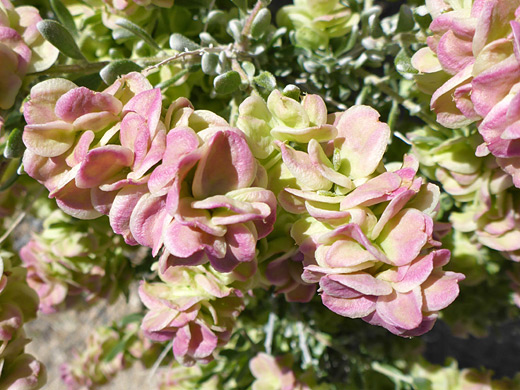 The most colorful part of grayia spinosa are the seed pods, initially yellow-green but maturing to a deep reddish pink. Pods have two wings, fused along the axis to form a round, flat disc, with the fruit at the center. The edges of the pods are entire. Individual plants produce either staminate or pistillate flowers, in both cases forming spike-like clusters subtended by leafy bracts; the former are formed of a four-lobed calyx enclosing four or five stamens, similar in length to the calyx lobes, while the latter have an exserted, two lobed stigma within a cup-shaped structure of two fused bracts.

Plants are shrubs, with branched, brown stems, which become whitish and woody with age. Leaves and younger stems have a light covering of short, branched, scaly hairs. Branch tips are spiny, especially when old. Leaves taper at the base to a short petiole. Leaf tips are lighter in color than the rest of the blade. 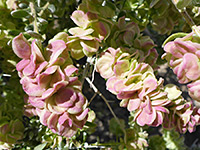 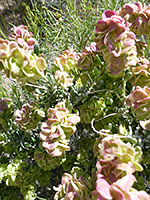