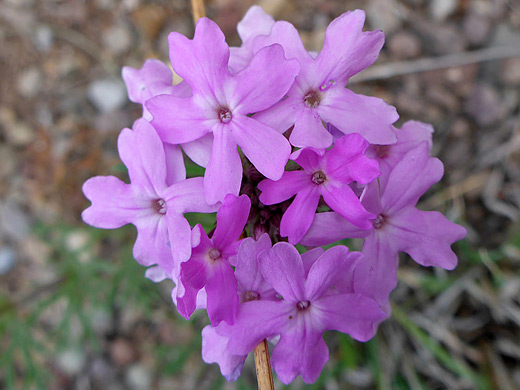 Glandularia wrightii is sometimes considered a variety of glandularia bipinnatifida, the main difference being the calyces, which are densely covered by glandular hairs; calyces of glandularia bipinnatifida are generally eglandular. Flowers of glandularia wrightii are light to dark pink in color, with a narrow corolla tube that opens abruptly to five spreading lobes, two positioned closer together than the other three. Lobes have a notch at the tip. The throat of the corolla is ringed by tiny hairs, which largely hide the four stamens and one style beneath.

Stems are square in cross-section, greenish red in color, and also have a covering of short hairs. Stems are erect, though may lean at an angle, especially when in bloom. Plants produce several stems, generally unbranched, bearing deeply lobed leaves at opposite intervals. Stems leaves are larger than those around the base. 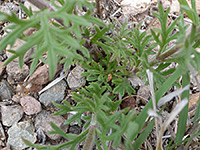 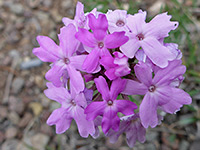