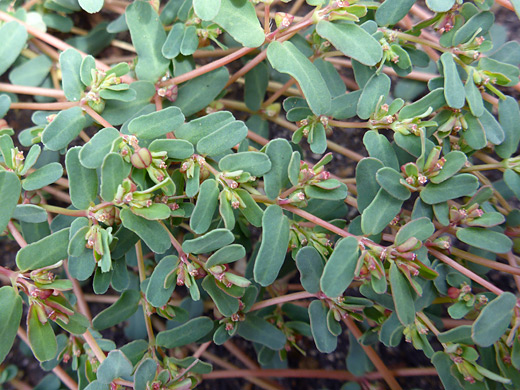 Leaves of euphorbia serpyllifolia are colored grey-green, rounded at the base and tip, with a faint, lighter (sometimes reddish) midvein and small teeth along the margins, on the upper half. The base of the leaves are slightly unequal, one side lower than the other. Stems are red, much branched, and generally prostrate. The leaves grow at closely-spaced intervals, and plants form dense mats. Stems contain milky sap.

Like all euphorbia species, the inflorescence is a modified flower known as a cyathium, which has a bell-shaped involucre, sometimes slightly hairy, ringed by (usually) four yellowish glands, each attached to a narrower, white appendage. The appendages have notched margins. The center of the cyathium contains a pistillate floret and up to 18 staminate florets, these consisting only of a stamen. When fertilized the ovary expands to form a three-chambered fruit, reddish along the chamber margins.