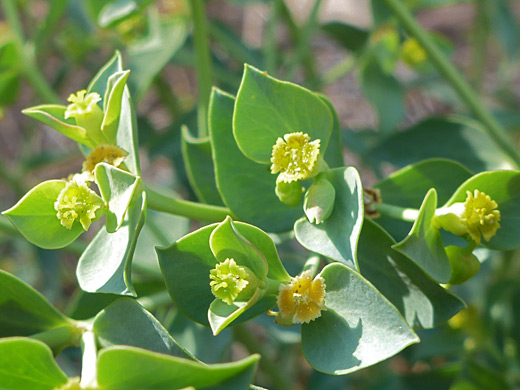 Woodland spurge (euphorbia lurida), Picture Canyon, Flagstaff, Arizona
Euphorbia lurida is part of the group of spurges with erect rather than prostrate stems, radially-symmetric involucres, and horn-like (rather than petal-like) appendages on the involucral glands. It is found in wooded environments, mostly in central Arizona and southern California.

The uppermost leaves are arranged in a whorl of four or (usually) five; others are alternate. Leaves are hairless or finely pubescent, with entire edges. The inflorescence is a compound cluster with five (less often three or four)primary branches, each usually dividing into two, between one and four times; the upper divisions are subtended by an opposite pair of stalkless bracts, as are the terminal flowers. The four involucral glands are fan-shaped, notched along the flat upper edge, and they enclose a group of up to 20 staminate flowers of a smaller number of pistillate flowers, which have forked styles. 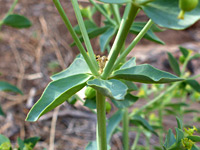 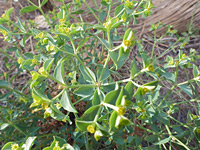 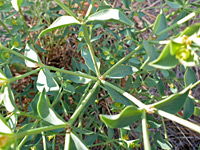