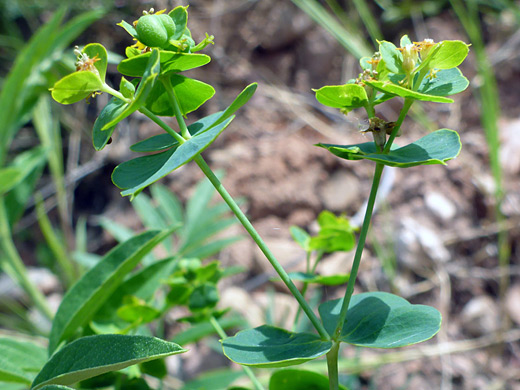 Leaves and flowers of euphorbia esula at Deerlodge Park, Dinosaur National Monument, Colorado
Euphorbia esula is native to Europe and Asia, and was introduced to the US in the 19th century; the plant is now found in most of the western states, particularly the Rocky Mountains and the northern Great Plains.

Leaves are long and narrow, pointed at the tip, with entire margins and a lighter-colored midvein. Leaf edges may be slightly wavy. Leaves are mostly alternate but the uppermost may be whorled. Leaves and stem are usually glabrous but may have a short hair covering. Plants produce several stems, branching from the base.

The main inflorescence consists of a single pistillate flower, which has three styles divided to about half their length, surrounded by between 11 and 21 staminate flowers, usually in five distinct clusters. Beneath the flowers are pairs of semi-circular, yellowish green bracts. Smaller flower clusters form from the upper leaf nodes. The fruit is a green, three-chambered capsule, with the residual styles attached to the top. 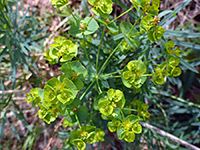 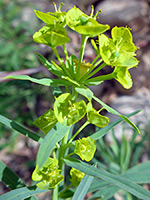 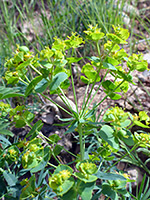