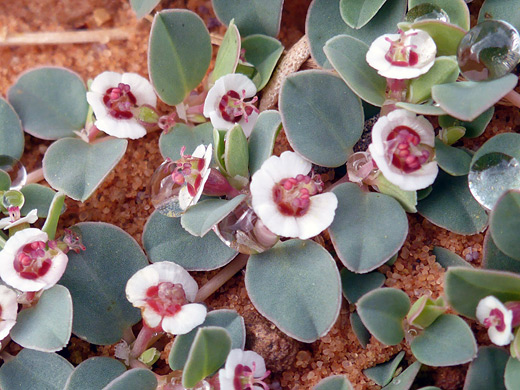 Euphorbia albomarginata in Red Rock Canyon National Conservation Area, Nevada
Euphorbia albomarginata is similar in appearance to many other members of the spurge family; a small, spreading, low-growing plant producing numerous grey-green leaves and red/white flowers. The inflorescence is actually a modified flower known as a cyathium, which consists of five fused, cup-shaped bracts and four white lobes with a red band (a nectar gland) at the base; the whole structure is only around a sixth of an inch in diameter. At the center are even smaller flower parts; a ring of 15 to 30 stamens around a forked ovary. The white part of the lobe is slightly wider than the red part. Lobe edges can be smooth or lightly notched.

Leaves grow on short stalks, with a fused, triangular stipule at the attachment point. The branched, prostrate stems are hairless, and contain milky sap. Stems and leaf edges are usually colored red. 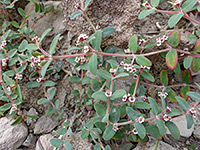 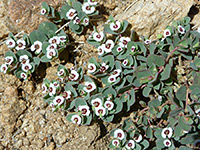 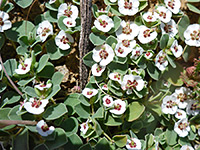