Plants > Wildflowers > Ephedraceae
The ephedraceae (Mormon tea) genus contains just one family, ephedra, with approximately 69 species worldwide of which 15 occur in the US, where they are confined to the Western states, from California, Nevada and far south Oregon, to Texas and west Oklahoma. Plants are gymnosperms, ie their seeds are not enclosed, and in the US they are most commonly found in arid, sandy locations, especially deserts and coastal areas.

Ephedraceae species are shrubs, the stems branching and jointed, bearing pairs of tiny, scale-like leaves, often short-lived. Instead of flowers they produce small pollen cones, at intervals along the stems. 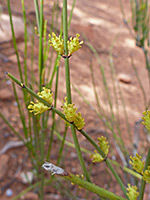