Plants > Wildflowers > Cleomaceae
Cleomaceae (spider plant) species were once part of the part of the capparaceae family, but recent analysis suggested they are sufficiently different to be moved to their own family. The US has 13 genera and 35 species, mostly with quite limited distribution; the two most widespread genera are peritoma and polansia. Plants are shrubs or herbs, hairless or glandular-hairy. Leaves are usually palmately compound, and alternately arranged; many species have stipules. The inflorescence is a spherical or elongated cluster, with heads that mature in sequence, from the outside inwards, so species may have fruits, flowers and buds at the same time - like the brassicaceae family, to which cleomaceae are genetically similar. Individual flowers have four sepals, sometimes joined at the base, four petals, and exserted stamens. 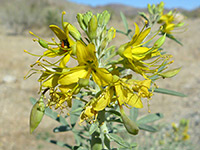 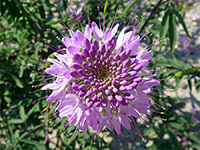 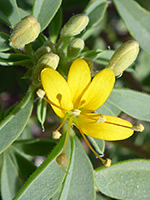 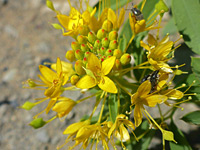 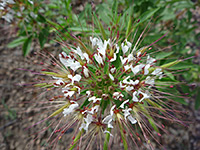