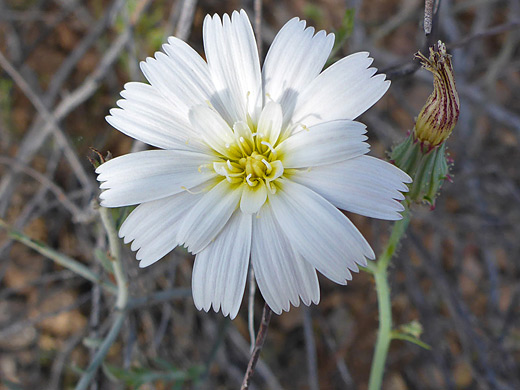 Leaves of calycoseris wrightii grow mostly at the base, and are divided into overlapping, linear lobes, above which the stems rise up to 8 inches tall; leafless apart from a few small bracts. The upper portion of the stem is sparsely covered by tiny glands on short, narrow stalks, resembling tacks, hence the common name for this genus (which contains only two species) of tackstem. This feature, and the leaf shape, differentiate this species from the otherwise similar rafinesquia neomexicana.

Flowerheads are formed of several dozen ligulate florets, yellow at the base otherwise pure white. The outer (lower) florets are much larger than those near the center. Florets are partly divided at the tip into five lobes. Phyllaries are in two rows; those in the upper series are about half an inch long and linear in shape, while those in the lower row are much shorter, and curved outwards. Heads are produced singly or in small clusters. 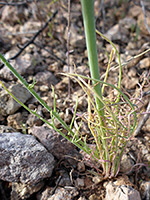