Plants > Wildflowers > Bignoniaceae
Most bignoniaceae (bigonia, or trumpet creeper) species are vines, shrubs or trees, and produce clusters of large, brightly-colored, bilaterally symmetric flowers. Leaves can be simple or compound, usually with an opposite arrangement along the stem. Flowers have a tubular corolla, opening to five lobes, and containing two or four stamens plus, usually, a shorter, infertile stamen, the staminode. Some species are grown as ornamental plants. The US is home to 27 genera and about 44 species, mostly in the east, and warmer regions of the west. 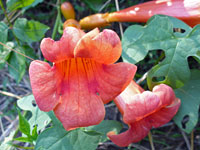 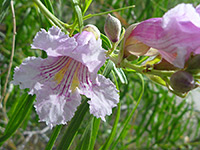 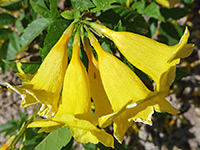