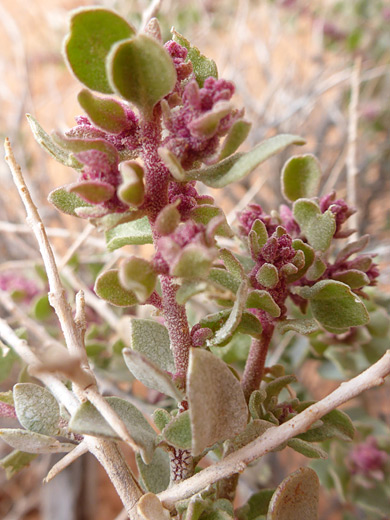 Atriplex confertifolia is a small shrub with woody, thorny branches, which, like the leaves and bracts, have a whitish, scale-like coating. This is a dioecious species; plants may produce male or female flowers, though the two types are similar in appearance, and inconspicuous - tiny yellow blooms in spikes or clusters less than half an inch long, at intervals along the upper stems. More noticeable are the pink or reddish bracts beneath the flowers; these are up to half an inch long, and quite thick. The bracts appear early in the season, followed by the flowers. The plant is most common in arid locations, often in salty soils, but it also occurs in forested areas at elevations up to 7,000 feet. 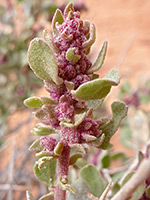