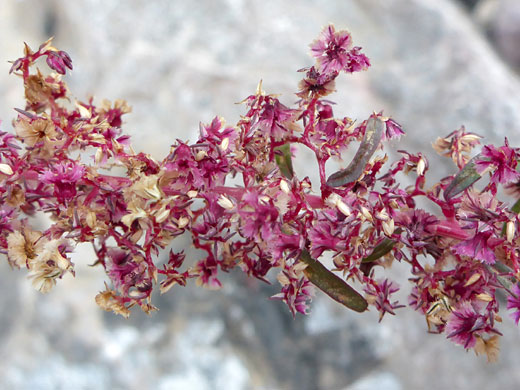 Amaranthus fimbriatus (fringed amaranth), Arrow Canyon, Nevada
Amaranthus fimbriatus is a monoecious species; individual plants produce both staminate and pistillate flowers, the former usually only at the tips of the inflorescence branches, which are short, relative to the main stem, resulting in an elongated cluster up to 10 inches long and one inch wide. Both flower types have five tepals, pinkish in color and equal in size, with finely, irregularly toothed margins, hence the common name of fringed amaranth. Male flowers are centered on two or three stamens, the female flowers on three or four stigmas. Female flowers are subtended by an ovate bract, about half as long as the tepals.

The hairless stems are green or purplish, often branching towards the base, bearing petiolate leaves at alternate intervals. Plants generally bloom only after summer or early autumn rainfall.