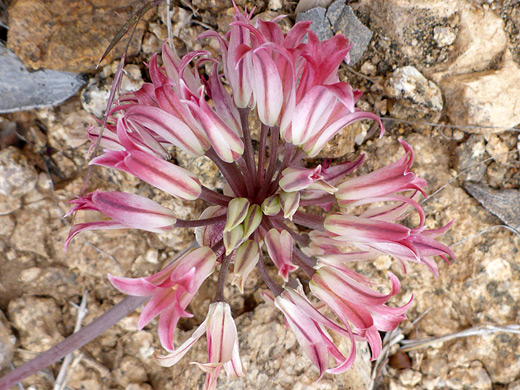 The spherical umbels of allium parishii contain between 6 and 25 flowers, on thick, purplish stalks around half an inch long - generally shorter than the flowers. The narrow, bell-shaped flowers have six pale pink tepals, darker purple along the midvein, and spreading at the tip. The inner three tepals are slightly shorter and narrower than the outer three; all are linear to lanceolate in shape.

At the flower center, not exserted, are a ring of six stamens topped by yellow anthers, and a shorter, yellowish pistil. Tepals have entire margins and pointed tips. The umbel is subtended by 2 or 3 purplish bracts, crossed by between 5 and 7 veins; the bracts persist during the flowering phase.

Each plant produces one leaf, a little longer than the flowering stalk. Leaves are sheathed at the base and cylindrical in cross-section. This is a relatively uncommon species, most often found on exposed, rocky hillsides in desert areas. 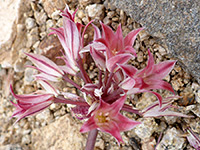 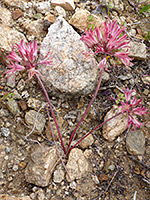