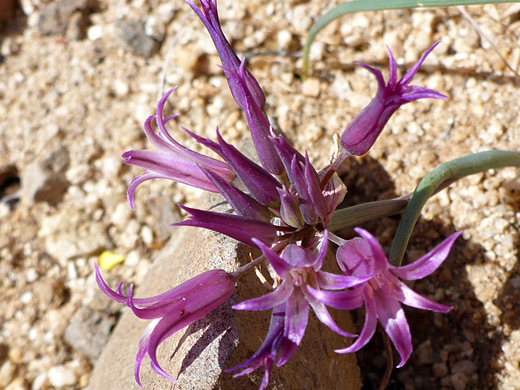 Flowers of allium fimbriatum, an onion species found only in California, are formed of six tepals, usually fairly uniform dark purple, just slightly deeper in color along the midvein, with recurved or spreading tips - this is var fimbriatum. Two other, less common varieties have much lighter tepals, pale pink or white, with a more pronounced midvein, and ascending tips; these are var mohavense of the Mojave Desert and var purdyi, found only in the coastal ranges near Clear Lake. They are differentiated by the scape (flowering stalk), which for the former is somewhat shorter and thinner. For all varieties the scape is smooth sided, and cylindrical in cross-section.

The umbel contains between 6 and 75 flowers and is subtended by two or three thin bracts, persisting during the blooming period. Bracts are crossed by between four and seven thin veins. The stamens and pistil are shorter than the fused section of the corolla. Each plant produces one leaf, sheathed at the base, persistent but withered, and often coiled, at flowering time. The leaf is a little longer than the scape. 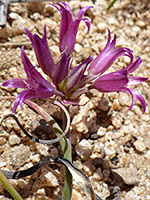 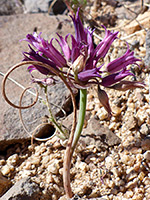