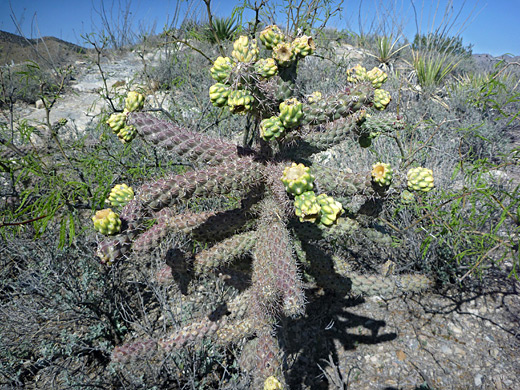 Cane cholla has a similar appearance to the buckhorn and staghorn varieties, and overlaps in range, but has generally thicker (one inch or more) stems that branch more evenly (at right angles) from more widely separated joints, and tend to droop downwards. Segments have varying lengths between 2 and 20 inches, covered in large, closely spaced tubercles and clusters of 6 to 18 short, whitish spines. The uniform spination makes the plant look smooth and fuzzy from a distance. Like some other cholla, plants turn purple in winter or during dry periods, and the stems become thinner. The bright purple flowers appear during the summer, followed by knobbly, spineless yellow-green fruit which stay on the plant until the following spring.

Cylindropuntia spinosior is common within its relatively limited range, which extends into north Mexico, and to higher elevations that most other cacti (over 6,000 feet), due to good frost tolerance. The cactus forms hybrids with several other species including cylindropuntia fulgida (jumping cholla), for which the resulting plant is cylindropuntia x kelvinensis. The straight, woody limbs of dead plants have an attractive pattern of holes, and are used to make walking sticks and other items. 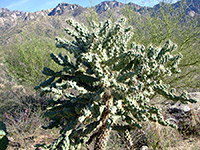 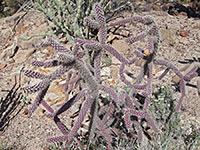 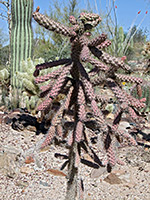 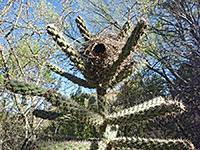 Birds nest in a cane cholla