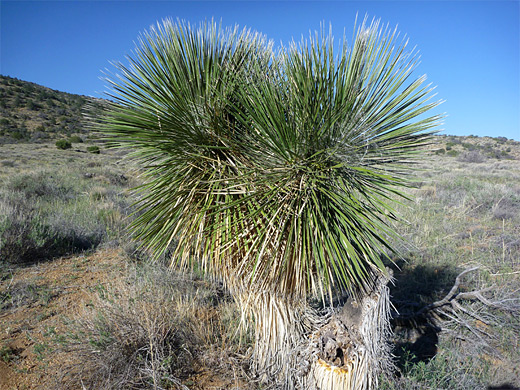 Yucca elata is a common, widespread and quite distinctive species, growing tall and eventually branching, forming tree-like plants up to 15 feet high, resembling the Joshua tree through generally smaller, with longer leaves and fewer branches. Ranges of the two overlap in southwest Utah and northwest Arizona, but the soaptree yucca is more common further east, in the grasslands and foothills of central and southeast Arizona, and the flat plains of New Mexico.

Leaves are pale or bright green in color, thin and flexible, up to half an inch across (slightly wider in the middle) and between 10 and 35 inches long. The edges are white, as are the short terminal spines and the long, curly filaments that grow most densely towards the center. Plants are old before they branch, hence most specimens have only one stem; the (usual) maximum number observed is seven. Dead leaves hang back against the stem and remain there for many years. Flower clusters are borne on stems rising 2 or 3 feet above the leaves. Flowers are pendant, globular or bell-shaped. 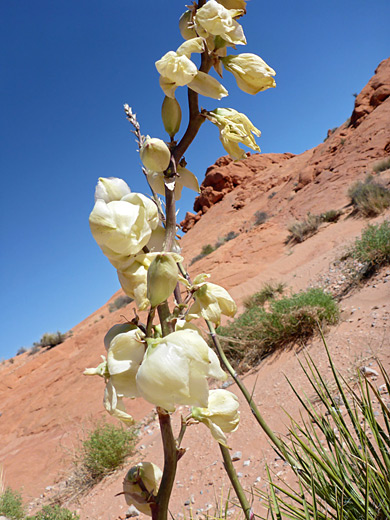 Flowers
Var elata has longer leaves (up to 35 inches) and larger flowers; this is found across south Arizona, south New Mexico and west Texas. The less common var verdiensis of central Arizona has shorter leaves, up to 17 inches, and smaller flowers. Another variant is var utahensis, sometimes considered a separate species; this is found over a small area of southeast Nevada, southwest Utah and northwest Arizona, and is characterized by the formation of large colonies (more than seven stems), of plants which remain low-growing, not becoming tree-like. 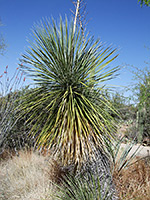 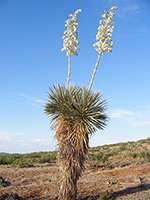 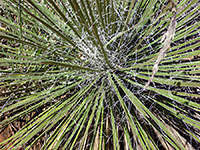 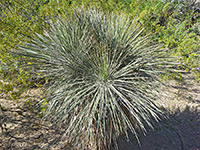