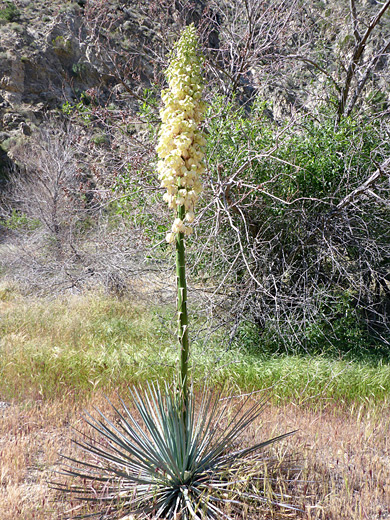 Hesperoyucca whipplei is one of only two species of this genus, which is differentiated from other yucca by characteristics of fruit and scape (flower stalk); the fruits split when ripe to release the seeds (fruits of yucca generally do not), the scape is relatively wide, over one inch (yucca scapes are less than one inch wide), and the bracts below each flower and along the lower portion of the scape are bent back, rather than ascending.

Plants are usually stemless. The rigid, grey-green leaves are between 10 and 40 inches long, and relatively narrow, only around one inch wide at the base, tapering very gradually to a spine at the tip. Leaf margins are yellowish, and lined by tiny teeth.

The scape can be up to ten feet high, so the flowers, which form along the upper half in a paniculate arrangement, are held well above the leaf rosette. Flowers are widely bell-shaped, or almost spherical, the six petals pale greenish yellow, often tinged purple along the edges. 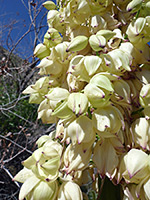 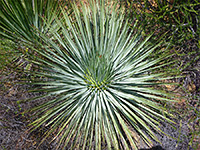