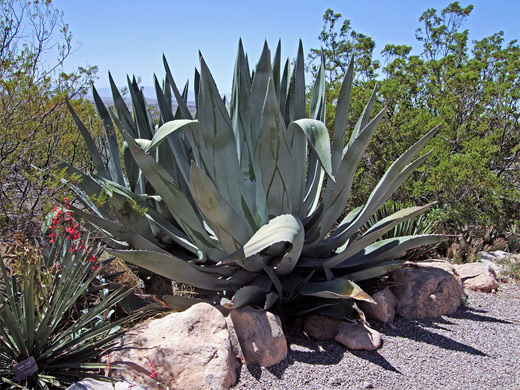 Although native to Mexico, and in the US growing wild in a just a few southerly locations in Arizona and Texas, agave americana is commonly used as a landscaping plant, since it is one of the largest and fastest growing of all agaves, producing a rosette 12 feet wide, with green or greyish leaves (sometimes with banded colors) up to 6 feet long. Like most agave, these are lined by sharp teeth, each about 1/3 inch long and an inch or less apart. In mature specimens some leaves curl backwards, resulting in a less symmetric plant.

There are a number of cultivated, smaller-growing varieties which have white or yellow stripes along the edges or the middle of each leaf, and also two sub species (Americana and Protamericana). The plant is found in a few locations in south Arizona, but it is believed these are not native; the only indigenous populations are in Starr County, south Texas.