Highlights:
Forty miles of Oregon's Pacific coastline, between Florence and North Bend - a mix of beaches, forests, lagoons, creeks and dunes, popular for hiking, camping, fishing and ORV use. Much is scenic and undeveloped, though most people come for recreation rather than the landscapes
Nearest cities with hotels:
Florence, Reedsport, North Bend
Management:
USFS
Location:
43.979, -124.138 (South Jetty Beach),
43.453, -124.276 (Horsfall Beach)
Seasons:
All year
Rating (1-5):
★★★★★ 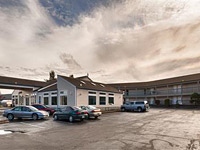 Riverside hotel in the small town of Reedsport along US 101, at the center of the Oregon Dunes NRA. Free full breakfast provided

Hotels in Reedsport - Affiliate disclosure
The rocky Pacific coast of Oregon is interrupted in the center by 40 miles of predominantly sandy terrain, between Florence and North Bend, and all is contained within the USFS-managed Oregon Dunes National Recreation Area, which extends from the shore several miles inland. The preserve is split into two halves by the Umpqua River, which meets the Pacific near Reedsport, and is reached by US 101. The highway stays generally 2 to 3 miles from the ocean, and most of the shore is remote and undeveloped; only four roads cross the dunes to the wide, sandy, windswept beaches that cover all 40 miles of the coast, though other access is possible via trails or off-road vehicles.

Although the sand dunes are the largest in the state, they only account for about one third of the area, the rest being a variety of habitats including coniferous forest, deciduous forest, grassland, marshes, creeks, freshwater lakes and lagoons, so the area harbors numerous different plant and animal species, and offers many possibilities for exploration.

Slough near the Siltcoos River
Like most national recreation areas, the majority of people come for recreation, the main activities here being camping, ORV use, fishing and boating. Hiking is less popular even though the park has plenty of trails, and cross-country travel is relatively easy in some locations. The landscape is certainly scenic, and photogenic, due to the contrasting environments of forest, sand, ocean and freshwater, especially when subject to the shifting light of a partly sunny, partly misty day. The coastline itself is not so interesting, since the beach is similar for the whole 40 miles - a near-continuous stretch of wide sands, lacking any offshore rocks, tidepools or inland cliffs.

There are five centers for visitor activities in the NRA; four near the coast (South Jetty Beach, Siltcoos River, Umpqua Dunes and Horsfall Beach) reached by side roads off US 101, and one along the highway (Oregon Dunes/Tahkenitch Creek). East of the main road but generally outside the preserve are several large, branched lakes, with facilities for camping, boating and fishing, largest being Woahink, Siltcoos, Tahkenitch, Clear, Eel and Tenmile. All are surrounded by very dense woodland and backed by steep hills further east, which prevent easy travel inland; the only route eastwards within this 40 mile section of the coast is along the Umpqua River valley, starting at Reedsport.

Oregon Dunes National Recreation Area is bounded in the north by the Suislaw River at Florence. Just south of the US 101 bridge, a side road forks off to South Jetty Beach, initially through forested land then across grassy, bushy, sandy flats. The ocean is not visible owing to a narrow line of dunes bordering the beach, so the road turns north and follows alongside, all the way to the mouth of the river estuary. En route are six day-use parking lots, from where short paths climb over the dunes to the wide beach just beyond. The roads ends at a larger parking area by the river, looking across to the houses in Florence on the far side, though vehicles can continue a little further, along a causeway that leads to a jetty extending 2,000 feet out to sea. The land south of the road is one of three sections of the NRA where ATVs are permitted; a part sand, part grass region extending for nearly 5 miles, as far as the next beach access road by the Siltcoos River.

The dark waters of Tahkenitch Lake

Continuing south, US 101 passes Woahink Lake, Jesse Honeyman State Park (containing dunes, a lake, a campground and several trails) and then Siltcoos Lake. The next side road to the coast starts just beyond, following the slow-moving Siltcoos River and ending after 1.4 miles next to the ridge of sand bordering the beach. Along the way are three trailheads and three campgrounds, one set in the middle of a curved lagoon, an abandoned meander of the river. An ATV trail heads north and links with South Jetty Beach Road, while the land to the southwest - a sandy, driftwood-lined expanse around the mouth of the river - is closed for half the year to provide a protected habitat for nesting birds. The misty river, reflective lagoon, mixed forest and distant dunes make this section of the park particularly attractive, and the campgrounds are deservedly popular.

Beach near the Suislaw River

US 101 comes close to one arm of Tahkenitch Lake, which is quite photogenic, partly lined by a dense mat of lily pads, and easily accessed from several roadside parking/boat launch areas. Next is the turnoff for Oregon Dunes Day Use Area, an elevated viewing platform and short boardwalk trail at the edge of a wooded plateau, overlooking an undulating sandy area one mile from the ocean. The scenery is archetypal of this part of the coast, with big dunes enveloping several 'tree islands', where small patches of woodland manage to survive amidst the deep sand. A three mile path loops through the dunes, and a little further south are two other trailheads (Tahkenitch Creek and Tahkenitch Dunes), this being the main area for extended hiking in the NRA (see trail descriptions).

After moving further inland to avoid the wide estuary of the Umpqua River, US 101 comes close to the Pacific once more and a short loop road forks off to Umpqua Lighthouse State Park, containing an elegant 65 foot lighthouse, built in 1894 and still fully operational. A nice campground is located nearby, beside scenic Lake Marie, plus several log cabins and yurts. Salmon Harbour Road descends through light woodland right to the coast (part of Ziolkouski Beach Park) then runs south a little way, as the land becomes increasingly sandy; this is the north edge of the biggest expense of unbroken sand in the NRA, much given over to ATV use. The dunes continue for 15 miles, all the way to the southernmost access road at Horsfall Beach.

US 101 next passes several campgrounds, a side road to two lakes, the small town of Lakeside and then more partly residential land before crossing Coos Bay to North Bend, at the south end of the NRA. One other coast access is via Horsfall Beach Road, which crosses part of the bay on a causeway and enters the forest, past various camps and ATV trailheads to a big parking lot also used for vehicle-based camping. As usual a ridge of grassy dunes separates this from the ocean just beyond, but the surroundings are not especially interesting, and all this area is mostly visited only by ATV-users.

Oregon Dunes Hiking
Descriptions of all trails in the NRA, most of which are quite short, accessed from US 101 or several side roads

26 views of the Oregon Dunes

Siltcoos River
Nearby places
Similar places
Sunset Bay State Park - near the south end of the Oregon Dunes, this park marks the start of the spectacular rocky coastline of south Oregon