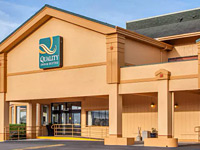 The main hotel in North Bend, beside Pony Village Mall, close to the waterfront and 11 miles from Sunset Bay. Free hot breakfast is provided

Hotels in North Bend - Affiliate disclosure
The beautiful rocky coastline of south Oregon begins, in the north, at Gregory Point near the small town of Barview and the larger communities of North Bend and Coos Bay. The point is home to a scenic lighthouse and is privately owned, but the popular Sunset Bay State Park lies immediately south, containing several sheltered sandy coves between jagged cliffs of colorful sedimentary rocks, angled at 45 degrees and eroded into spectacular reefs, ridges, terraces and pinnacles.

Together with Shore Acres State Park further south, the two preserves cover perhaps the most unusual and scenic place along the 100 miles of the coast from here to the California border; although lacking the large scale vistas and sense of remoteness of many other places, this location is remarkable for the great variety of rock forms, in particular the curious tafoni, where the sandstone, predominantly orange or grey in color, has weathered into strange honeycomb structures. Most people visit Sunset Bay State Park for the main beach, a wide, sheltered stretch of clean sand adjacent to a nice campground, but for photographers and hikers the best parts are the rocky shores at either side, viewable by paths or off-trail scrambling.

Unlike most of the south Oregon coast, Pacific Highway US 101 runs some way inland from Sunset Bay, and instead access is by Cape Arago Highway, which follows the edge of Coos Bay, through Empire, Barview and Charleston, and is signed to the 'state parks', the others being Shore Acres and Cape Arago, where the road ends. Traffic lessens as the highway passes Lighthouse Road, a private drive leading to the lighthouse on Gregory Point, then descends to the edge of Sunset Bay, beside which are two elongated parking areas (no charge to enter). The campground is just inland, offering 29 full hookup sites, together with electric-only sites, tent spaces, group areas and several yurts. The bay has a broad swathe of whitish sand, with exposed rocks beyond, at low tide.

The cliffs at either side of Sunset Bay are formed of the inclined strata typical of this region, and although most of the park is to the south, the coastline can also be explored to the north, by walking along an unofficial path that heads up a slope into dense woodland above. The trail splits several times but the main route leads westwards close to the sheer cliff edge, soon becoming 50 feet above the beach, then curves around a corner of the headland where another path descends back to sea level, opposite Squaw Island, an offshore rock topped by a few struggling trees. The island is connected to the mainland at low tide by a flat causeway, which continues at the far side towards other semi-submerged rocks, further out in the ocean. The upturned strata of the reefs and terraces hereabouts form thin, straight ridges between eroded channels, and the whole area is very photogenic, as is the next short section of coast extending to Gregory Point. Paths continue a little way further north but soon reach a fence marking the edge of the private land of the US Coast Guard, who operate the lighthouse.

Parking for the southern section of Sunset Bay State Park is a short distance south of the beach, after the road makes a wide U-bend across Big Creek, and close to a smaller, inaccessible inlet (Norton Gulch). Trails lead both ways; north back to Sunset Bay and south towards Shore Acres. To the north, the trail runs past the gulch, along the side of a grassy clearing used for private camping, then past several small coves lined by more scenic rocks. One bay is guarded by a long, narrow ramp, formed by a thick rock layer upturned by 45 degrees, extending most of the way across the entrance, with a detached section beyond. The path reaches a viewpoint the edge of Sunset Bay after half a mile. Back at the parking area, the southwards trail leads to more spectacular scenery including outcrops of tafoni rocks, contained within the adjacent Shore Acres State Park.

14 views of the park

Gateway to an inlet