Two routes exploring the largest area of eroded badlands in the national monument; a 3 mile loop around the perimeter, rising quite high above, and a shorter path along a ravine to the middle of the basin

Season: All year, though winters are cold

Trailhead: Parking area on the east side of Hwy 19

The main hiking area in the Sheep Rock Unit of John Day Fossil Beds National Monument is Blue Basin, centered on an outcrop of grey-blue badlands, heavily eroded, lacking any vegetation and split by a branched ravine, which provides a course for the 0.8 mile Island in Time Trail, the best way to see the rocks close up. Far fewer people hike the 3 mile (loop) Blue Basin Trail, which circles all around the basin, climbing quite high above so giving good views not only of the badlands but also up and down the John Day River valley.

The basin is one of the more important fossil sites in the monument, and while no specimens are visible in a natural state, there are three replica fossils embedded in stone along the Island in Time Trail. The brightly colored rocks were originally volcanic ash, resulting from eruptions around 29 million years ago.

Both trails begin at a parking area on the east side of Hwy 19, right at the north edge of the main section of the national monument; a field just north marks the start of private land. The suggested route is to follow the loop path clockwise, all the way to an intersection with the lower end of the Island in Time Trail, then take this into the middle of the basin. The Blue Basin Trail starts off through bushy scrubland at the foot of the hills enclosing the north side of the basin, passing a small valley (Turtle Cove) that contains a few lesser outcrops of the grey-blue rocks, then turning east up a moderately narrow, mostly grassy ravine that becomes partly wooded higher up. The path follows the valley floor for a while before climbing the slopes on the south side, straight at first then switchbacking up to a treeless ridge separating the ravine from Blue Basin. A short spur descends a little to a viewpoint of the badlands, which contrast greatly with the yellow-green grass of the surroundings, and the deep reds of a group of undulating mounds to the north, like the more extensive formations of the Painted Hills Unit.

The main path curves round the upper end of the largest ravine through the badlands, while staying some distance above, then passes through a gate in a fence marking the edge of the national monument, into adjacent ranchland. It crosses a gully, rises up the slopes on the far side, re-enters the monument and soon begins a long series of switchbacks down a grassy hillside, eventually joining the Island in Time Trail, 700 feet from the parking area. Turning right, this wider and better used path heads up the ravine, crossing a small stream several times - at most times of year this is just a tiny trickle of blue-grey water. Interpretive notices along the way include information about three in situ replica fossils - a turtle, a pig-like animal (oreodont) and a saber-tooth tiger skull. The trail ends near the upper end of the ravine, completely surrounded by the pinnacles, ridges and fissures of the soft blue rocks of the John Day Formation - see 360 degree panorama. 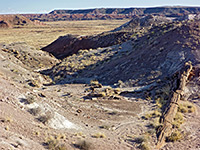 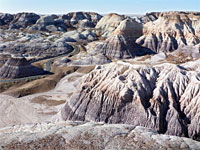 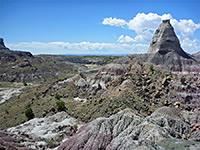 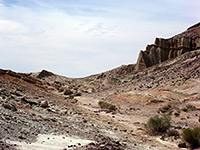 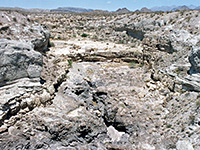