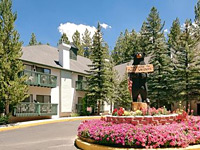 Swiss chalet-style hotel in a densely-wooded residential neighborhood one block from the main road (CA 18) in Big Bear Lake, one mile from the shoreline

All hotels in Big Bear Lake - Affiliate disclosure
The San Bernardino Mountains are an easterly extension of the larger San Gabriel Mountains, and together with the San Jacinto Mountains to the south form a natural boundary between Los Angeles and other cities of the Inland Empire, and the Mojave Desert that covers most of southern California. The San Bernardino range stretches for 55 miles just northeast of the namesake city, rising to a height of 11,499 feet at San Gorgonio Mountain, in the middle of a 94,700 acre wilderness area, part of Sand to Snow National Monument. The scenery is impressive enough though not so spectacular, yet the proximity to the nearby cities makes the mountains very popular, both for recreation and as a center for weekend and vacation homes, especially in the two towns of Lake Arrowhead and Big Bear Lake.

The main access road is CA 18, known as the Rim of the World Drive since one section follows the edge of a high plateau beneath which the hills slope down very steeply to San Bernardino Valley, 4,500 feet below, though the amazing views are often spoilt by smog. Most of the terrain in the high country is wooded and quite gently sloping, without any great rocky peaks apart from a relatively small area in the San Gorgonio Wilderness, accessible by hiking and backpacking. Apart from the lakes, other attractions are a dozen or so smaller villages, five ski centers, many campsites, trails and back roads. Away from the towns, most of the mountains are part of the San Bernardino National Forest, which extends across the east end of the San Gabriel range, and also includes most of the San Jacinto Mountains.

Map of the San Bernardino Mountains

The mountains are approached from the west via CA 138 from Cajon Pass on interstate 15; the road curves across a range of undulating grassy hills, straightens out along Summit Valley towards Silverwood Lake (a State Recreation Area, good for boating, fishing and bird watching), then becomes winding again, and steeper, climbing through pine forest to Crestline, a dispersed town of many houses and log cabins, set beneath tall trees. The road meets Hwy 18 on the south side of the mountain crest - a wider, busier road traversing steep, treeless slopes, and giving some of the best views in the area, down towards the hazy San Bernardino Valley. The highway has many good viewpoints for several miles eastwards, before re-entering wooded land and passing through quite a developed region, especially around Lake Arrowhead. The surroundings are more natural further east, as the road winds between hills and valleys to Big Bear Lake, the largest town in the mountains, occupying the south shore of a 7 mile long reservoir. Past town, CA 18 makes a quick descent northwards, dropping 3,500 feet over ten miles into the flat lands of the Mojave Desert, near Lucerne Valley. The other (west) end of CA 18 has an equally steep climb from San Bernardino, with several fine overlooks including Inspiration Point and Panorama Point. A few miles east, CA 330 provides another route into the mountains, joining Hwy 18 at the village of Running Springs. The only other paved road in the area is the less traveled Hwy 38, from Redlands to Big Bear City (52 miles); this curves around the edge of the San Gorgonio Wilderness, passing many USFS campsites and trailheads, and encountering much less development than the other roads.

Big Bear Lake is the destination for many visitors to the San Bernardino Mountains; it is a narrow reservoir set in rolling, forested land within sight of higher summits to the southeast, and ringed by main roads along both sides, giving easy access to the shoreline. The north edge is less built up, and the highway passes plenty of parking places next to sandy beaches and wooded promontories - mostly free to enter though the USFS charge a fee for some locations with more facilities. The town's two ski centers (Snow Summit and Bear Mountain) are higher up in the hills on the south side of the lake, and are usually open from December to April. Lake Arrowhead is part of a more developed, resort-like area, surrounded by residential streets, its branched shoreline lined with hundreds of private piers; there is only limited access to the general public.