Highlights:
Northernmost component of Redwood National and State Parks - a 15 mile long stretch of particularly dark and dense redwood forest either side of the Smith River, viewable from a network of trails. Perhaps the most atmospheric of the parks, as it receives a little more sunlight than those beside the coast
Nearest city with hotels:
Crescent City, 5 miles
Management:
NPS/California State Parks
Location:
41.797, -124.086
Seasons:
All year
Rating (1-5):
★★★★★
Weather: 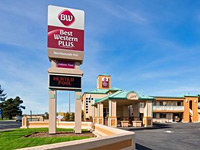 Full service hotel including onsite restaurant/bar, along US 101 on the south side of Crescent City, with a beautiful, rural location opposite the marina

All hotels in Crescent City - Affiliate disclosure
Named after an explorer and fur trapper who traversed this remote region in the 1820s, Jedediah Smith Redwoods is the northernmost of the four segments of Redwood National and State Parks, and the only one not including any part of the Pacific Coast. The park comprises 15 square miles of lush, hilly land bordering the Smith River, most of which is dark and densely wooded, containing large ferns, thick moss, colorful lichens, flowering azeleas and many other plants in addition to the giant redwoods. Numerous big trees grow close to the main road (US 199) and along the park's small network of footpaths, though much of the interior has no trails so is virtually inaccessible, due to the steep terrain and the thick undergrowth.

Hidden somewhere south of the highway along the upper stretches of Clarks Creek is the secret Grove of Titans, home to some of the largest coastal redwood trees anywhere, but whose location is not publicized, and reachable only by off-trail hiking. Because of the variety of the supporting plant life, the huge size of some of the redwoods, and the gaps in the canopy that allow shafts of sunlight to reach the forest floor (as this region is less affected by the sea fog that often covers the woodland closer to the coast), Jedediah Smith is considered to be the most scenic and atmospheric of the four redwood parks, despite being the least visited. Besides ample opportunities for looking at the trees, the park also offers swimming, fishing (principally for salmon, cutthroat trout and steelhead trout), rafting, cycling and camping.

Highway 199 from Crescent City enters Jedediah Smith Redwoods State Park from the west, passing several trailheads and a turn-off for the day use area/campground, for which an entry fee is charged, unlike all other sites which are free. The road bridges the wide but usually shallow Smith River, continues through the small village of Hiouchi then exits the park and follows the Middle Fork of the river eastwards for many miles. Two other vehicular routes in the park are the short, paved but narrow Warner Road that leads to a section of the river bank and to two trails, and the equally narrow and unpaved Howland Hill Road which follows a stream (Mill Creek) into the backcountry, within sight of countless impressive redwoods. US 199 is a busy two-lane highway edged in many places by trees growing right next to the carriageway, so roadside parking is very limited, and even the few trailheads have space for only a small number of vehicles.

The best way for a quick introduction to the redwood forest is to walk along the Simpson Reed/Peterson Memorial trails, which together form a one mile figure-of-eight loop. The path crosses a small stream and winds through a very dense section of the woods, encountering all sizes of redwoods from young saplings to huge old growth trees. Some new trees are growing several feet above ground level, either on top of the many thick fallen trunks, or over the bark at the base of living trees, such is the richness of the environment. The forest shows some evidence of past fire damage, but not much, unlike the drier sequoia forests in the Sierra Nevada that are frequently affected by wildfires.

Although most of the overgrown, hilly interior of Jedediah Smith Redwoods State Park has no trails so is essentially unreachable, there are several short paths starting along US 199, plus three longer, backcountry routes accessed by the Howland Hill Road (Little Bald Hills, Mill Creek and Boy Scout Tree). Summaries of all trails:

Summaries of all trails are given below

Boy Scout Tree Trail
★★★★★
2.6 miles, 300 feet
Starting along the unpaved Howland Hill Road, this path encounters many huge redwoods in a variety of environments, ending at a photogenic waterfall

Hatton Trail
★★★★★
2.1 miles, 350 feet
One short section of the Hatton Trail loops round an impressive redwood grove close to the highway, while the main path leads east into higher, more uniform forest.

Stout Grove Trail
★★★★★
0.6 miles, 40 feet (loop)
This short path tours perhaps the most photogenic grove of redwoods in the park, situated on flat land near the Smith River.