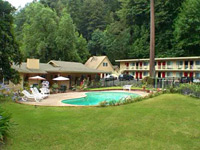 Small hotel along Hwy 9 in the quiet town of Ben Lomond, 11 miles from the Big Basin Redwoods. Free breakfast and an outdoor pool

Hotels in Ben Lomond - Affiliate disclosure
Update, August 20th 2020 - Wildfires in the Santa Cruz Mountains have destroyed all structures in Big Basin Redwoods State Park, and damaged many of the trees, though the majority are likely to have survived. The park is now closed indefinitely

Coastal redwood trees (sequoia sempervirens) grow in a narrow band on the hills a few miles inland from the Pacific Ocean, over much of the western USA coast from Oregon as far south as Salmon Creek Canyon in the Santa Lucia Mountains east of Big Sur. In California, the largest trees, and the most famous locations, are quite far north (Redwood National Park, Humboldt Redwoods), but many extensive groves are found around San Francisco Bay, both in Marin County to the north, at Mount Tamalpais and Muir Woods, and in the south, where the steep-sided mountains between San Jose and Santa Cruz are covered by dense redwood forests stretching over 30 miles.

The largest protected area is the 18,000 acre Big Basin Redwoods State Park (created in 1902 - the oldest state park in California), and while most of this is rather inaccessible, a scenic road winds through the eastern corner and passes many hiking trails, both long and short. Land elevation in the park ranges from sea level to 2,000 feet on the mountain tops, and the weather is similarly varied - often cold and foggy by the coast but sunny and windy on the ridges.

Big Basin Redwoods State Park map, showing the layout of the campgrounds and the location of the trails near the visitor center (from the California State Park Service):

Only two main roads penetrate the Santa Cruz Mountains south of Silicon Valley; the quickest is Highway 17, the principal route from San Jose to Santa Cruz. The other, which reaches the Big Basin Redwoods, is Highway 9, also starting from Santa Cruz then heading up the narrow, winding San Lorenzo River valley before climbing over a ridge, across the San Andreas Rift Zone and descending into the San Jose suburbs at Saratoga. The southern half of Highway 9 is quite developed, and the road passes a continuous line of residences, small shops and rustic lodges, all nestled between tall trees on the steep slopes above the river, in such towns as Felton, Glen Arbor, Ben Lomond and Brookdale. The northern half is steeper, narrower, and largely undeveloped. The state park is reached by a side road (236) starting in the south at the village of Boulder Creek, and this is the most used approach, arriving at the park entrance station after 9 miles. Beyond this the route is even more bendy, though very atmospheric, as it reduces to a single track through particularly dark, deep forest, where the redwoods in places grow very close to the road. Road 236 meets Highway 9 once more at Waterman Gap, from where Saratoga is 13 miles further.

The headquarters of the state park consists of various log cabin buildings, a visitor center and a small shop, next to which is a huge redwood cross-section, illustrating the size and growth ring patterns of the trees. Nearby are several fire roads (closed to private vehicles), campgrounds, plenty of parking, half a dozen picnic areas and a number of trailheads. Entry (2020) is $10 per vehicle, with trail maps and brochures available for an additional fee. The place has a quiet, peaceful air - the forest is moist and cool, traffic is light, and once away from the road, the trails are little used. Like most parks containing trees, the main activities are hiking, biking & horse riding, though one trail is pretty much like any other. In the Big Basin, the redwoods grow in clusters between other trees - madrone, tanbark oak, Douglas fir - with large specimens generally quite isolated. The forest contains plenty of fallen trunks in various states of decay, plus a scattering of fire damaged trees both live and dead. Other places show signs of past timber operations in the form of sawn-off stumps and sectioned logs. The woods are well watered, crossed by small trickling streams and dotted with marshy meadows, and the thriving plant life includes large amounts of Spanish moss, draped over the conifer branches. Near the visitor center, quite a few trees have been sponsored, and bear a name plate identifying their benefactor.

Trails Near the Main Road

Big Basin Redwoods State Park has over 80 miles of trails, mostly in the remote western and central regions. The shorter trails around Highway 236 are described below.