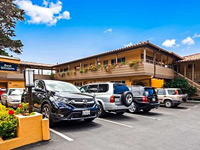 Popular hotel in Carmel, within walking distance of all shopping, dining and art galleries in the town center. Nine miles from Garrapata State Park

All hotels in Carmel - Affiliate disclosure
Highway 1 enters Garrapata State Park six miles south of Carmel (see Big Sur area map), though the boundary is marked only by one small inconspicuous sign; in contrast to the busy, developed sites around Point Lobos, Garrapata has no facilities apart from 19 numbered access points and several footpaths. The park contains a scenic stretch of the coast, including a beautiful sandy beach and a high promontory, plus several square miles of the foothills of the Santa Lucia Mountains, east of the road.

The hills are covered mostly by chaparral and grassland though some of their narrow ravines harbor groves of redwoods. One loop trail climbs 1,800 feet up the slopes for great views of the trees and the coast, though most visitors come just to gaze at the ocean from along the highway, or to spend some time on Garrapata Beach. There are no campsites in the state park; the closest place for free camping is in the Padre National Forest a few miles along the narrow Palo Colorado Road, which meets the highway 1.5 miles south of the beach.

The main viewpoint in the state park is at Soberanes Point, reached from stops 8, 9 or 10 - all the numbered signs have a small layby for parking, and all are on the west side of the highway apart from 8. The point features a 290 foot hill (Whale Peak) and a collection of beaches, rocks, narrow channels and small islands. A path loops around the peak passing close to the water's edge, and a spur leads to the top - a sometimes windy summit bearing weathered rocks covered by colorful lichen, and which gives an excellent view over several miles of this part of the Big Sur coastline. Unlike the pine and cypress-covered rocks of Point Lobos, only low bushes, grass and wildflowers grow on the hillsides here. It is worth walking off trail a short distance to the westernmost edge of the point, an area with interesting rock formations and small coves strewn with mussels and other marine debris. The landscape has a number of striking color contrasts, including aquamarine waters, white-topped waves, red-leaved ice plants and green grass.

Lichen and ice plants on the summit of Whale Peak

The second of the two main attractions of Garrapata State Park is beautiful Garrapata Beach, surely one of the best on the whole Big Sur coast, yet despite the picturesque surroundings, not many people visit, perhaps as there are no facilities. The beach has easy access, is wide and sandy, clean and scenic, with isolated rocks out to sea, big surf and low, colorful cliffs at the edge that provide plenty of places to shelter if the wind is blowing. The mile-long golden sands are unspoilt by litter, covered in places only by washed-up kelp. Access is from two short paths starting from points 18 and 19, one of which crosses the small stream of Doud Creek. The larger Garrapata Creek also flows into the ocean across the beach, forming quite a large, shallow lagoon just inland, good for paddling. A little way upstream, Highway 1 crosses high above the creek on an arched bridge, just one of many graceful spans along the coastal road. As with most beaches along Big Sur, the Pacific Ocean is too rough for swimming, but several hours could be spent at the beach, relaxing or exploring. The sands are generally out of sight of the road though just a few minutes walk from it. Nude sunbathing is tolerated here.

Apart from Soberanes Point and the short paths to Garrapata Beach, there are only two trails in the state park, forming a 4.5 mile loop into the hills on the east side of Highway 1. The Rocky Ridge Trail climbs 1,800 feet up exposed, grassy hillsides for great views of the coast, then descends steeply into the deep, narrow, wooded valley of Soberanes Creek, where it meets the Soberanes Canyon Trail. This follows the creek 1.5 miles back to the road, passing redwoods, oak trees, ferns, pools, and small waterfalls. Two spur paths lead to 1,977 foot Doud Peak (1.5 miles) and to more redwoods along the north fork of the creek (0.75 miles).

The official brochure for Garrapata State Park, from the California State Park Service: