Highlights:
Sheltered, wooded, riparian ravine on the east side of the Huachuca Mountains, containing varied plant and animal life (especially birds), and several historic structures. Managed as a preserve by the Nature Conservancy. Toured by a one mile loop path, which connects to a longer route further upcanyon, within the Coronado National Forest
Nearest city with hotels:
Sierra Vista, 9 miles
Management:
Nature Conservancy
Location:
At the end of Ramsey Canyon Road
Seasons:
All year, though closed Tuesdays and Wednesdays from November to March
Rating (1-5):
★★★★★
Weather: 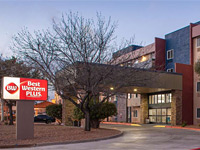 All hotels in Sierra Vista - Affiliate disclosure
Ramsey Canyon is a deep, shady, wooded ravine on the east side of the Huachuca Mountains near Sierra Vista in far south Arizona, containing a small but permanent stream, and its lower end is managed as a preserve by the Nature Conservancy, because of the varied and abundant animal and plant life. The place is especially noted for butterflies and birds (including many hummingbirds), with dozens of species of each seen throughout the year. The diversity is due to the year-round water supply and the sheltered surroundings, at the edge of one of the 'sky islands' of southeastern Arizona, and also the cross-roads location, close to the Sonoran and Chihuahuan deserts, the Sierra Madre of Mexico and the southern end of the Rocky Mountains.

Ramsey Creek is lined with a rich range of vegetation, including wildflowers, desert species like yucca, agave and cacti, and large trees such as Apache pine, Arizona sycamore, oak and field maple. The flat floor of the lower canyon, within the preserve, also contains several historic structures, relics of the first Western settlers here, in the late 19th and early 20th centuries, and these, and the wildlife, may be seen along a one mile partial loop trail, running along both sides of the creek.

Fireplace
The creekside path links with a longer route, the Hamburg Trail, which exits the preserve into the surrounding Coronado National Forest, climbs steeply at first to bypass an inaccessible, cliff-lined section of the canyon then returns to the stream and follows this to an open area at the upper and, site of an abandoned mine, while passing many pools and little cascades en route.

Ramsey Canyon Preserve is a popular location, in part due to the proximity to Sierra Vista, and the easy access from Hwy 92, via the short Ramsey Canyon Road; this passes a few scattered houses and the parking area for the Brown Canyon Trail which follows a similar canyon to the north, then enters the lower end of Ramsey Canyon. There are several more houses along the way, and an RV site, now in wooded surroundings, before the road fords the creek and ends at the parking area in front of the visitor center/bookstore, at the entrance to the preserve. Places are limited (27), RVs are not allowed and the lot can fill up by mid morning during popular times of the year. There are no other parking spaces back along the road for at least a mile. The busiest times, and the peak months for birdwatching, are between April and September, then again in October when the leaves are changing color. The preserve is open all year though closed on Tuesdays and Wednesdays between the start of November and the end of March. Fees (2020) are $8 per person, free for the under 13.

James House, on the north side of the creek

Adjacent to the visitor center is a small garden including several hummingbird feeders; more are seen along the trail. The path starts through the building, and consists of two connected loops, linked by footbridges, allowing either a short stroll, around half a mile, or a longer though still easy walk of just over one mile. Most of the valley floor is thickly wooded though there are a few clearings, one larger grassy area, several patches of wetland, and a few tributary streams. In some places the spring-fed creek flows over smooth granite bedrock forming pools and cascades but most is rather overgrown. The two main historic structures are James Cabin, a single story log building erected in 1902 by John James, and, on the opposite side of the creek, the larger James House (1911), to where the family moved after the former dwelling proved too small. There is also a tall stone chimney, adjacent to the meadow, this the only relic of another residence. At its peak the canyon was home to nearly 100 people, the first to arrive being Gardner Ramsey in the 1880s, after whom the valley is named.

Hamburg Trail
★★★★★
2.5 miles, 1,300 feet
Secluded path further up Ramsey Canyon, climbing steeply to pass a cliff-lined section, then following close to the streambed, through thick woodland, to an old mine site

Cabin by the creek

Madera Canyon, Arizona - forested ravine on the west side of the Santa Rita Mountains