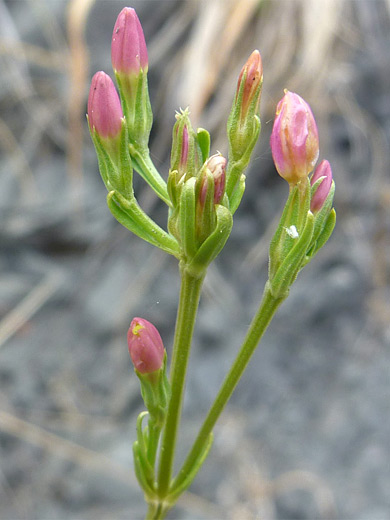 Zeltnera muehlenbergii is mostly found in California, beside or close to the coast and in the northern reaches of the Central Valley. Plants are small, less than one foot high, bearing narrow leaves, and branching freely, the branches topped by clusters of small pink flowers, which are fully open for a relatively short time. Leaves grow at regular intervals along the stems; those lower down tend to be widest towards the top, while those higher up are widest towards the base. Stems and leaves are hairless.

Flowers are borne on stalks of around a third of an inch, subtended by a narrow bract. The whitish corolla tube opens to five pink, spreading lobes, rounded at the tip, surrounding two stigmas and five stamens, which are topped by yellow anthers. Beneath the corolla is a light green calyx, divided almost to the base into five narrow, pointed lobes. 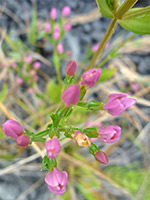