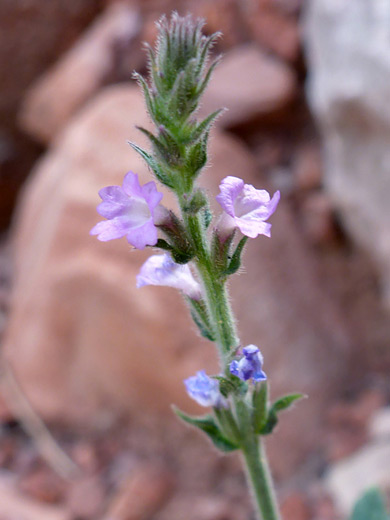 Leaves of verbena plicata grow in opposite pairs at quite widely-spaced intervals along the glandular-hairy stems; plants typically produce between four and eight stems, branching from the base, and generally angled upwards. Both surfaces of the leaves also have a glandular hair covering, especially those around the middle of the stem. Leaf veins have a pinnate pattern, and are recessed on the upper surface, prominent below. Leaves are attached by a winged petiole, about half an inch long, sometimes clasping at the base.

The inflorescence is a narrow, vertical spike, up to 10 inches in length. Flowers form at alternate intervals, subtended by short, hairy, unlobed bracts; they have green calyces, similar in length to the bracts (about 0.2 inches), and somewhat longer corollas, colored pink to pale blue, opening to five lobes, three upper and two lower. 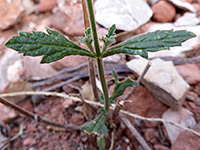