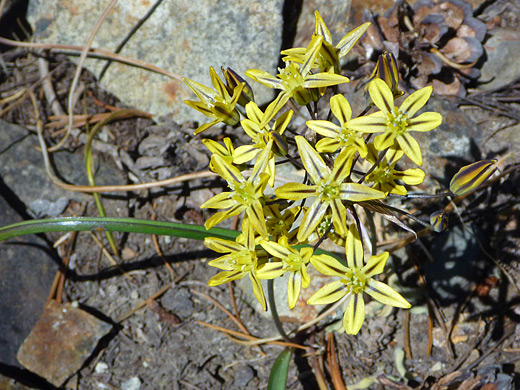 The yellow flowers of triteleia ixioides are quite striking; they have six narrow, lance-shaped tepals with a lengthwise brown, purple or green stripe down the middle, while at the center are a pistil and six short stamens, projecting forwards from a cup-shaped base. The tepals may open only partly, or fully, curving back towards the stem. Flowers form a rounded cluster (umbel), joined to the stem by short stalks (pedicels). Tepals are the same color above and below, and may have a purplish tint. There are five varieties, differing in the flower characteristics; two are found only along the California coast, well separated from the inland species.