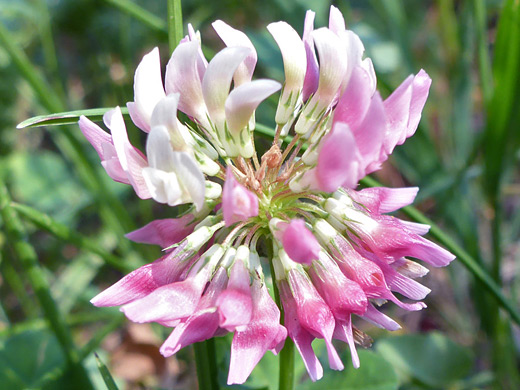 Trifolium hybridum is a naturalized US species, originally from Europe, characterised by wide, evenly-toothed leaflets and spherical flower clusters held well above the leaves. Stems and leaves are hairless. Stems may grow sideways or vertically upwards. The stalked leaves have a pair of veined stipules at the base. Leaflets have a recessed midvein and fainter, parallel side veins, terminating in the edge teeth. The leaflet tip is marked by a tiny spike. Leaflet surfaces are evenly green in color, lacking any lighter patches.

Individual flowers are attached by green or purplish stalks, up to a quarter of an inch in length, initially angled upwards or outwards, becoming reflexed when mature. The cluster is around one inch wide. Flowers are supported by a hairless, light green or whitish calyx, crossed by ten faint veins, and extending to five narrow green lobes, which are generally a little longer than the tube. Flowers are white initially, becoming mostly pink. 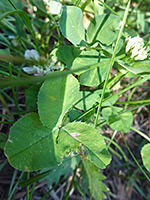 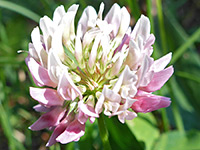