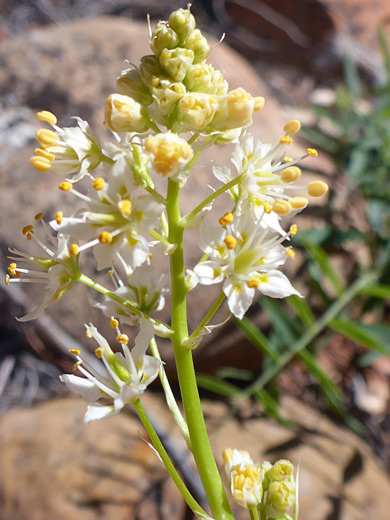 Flowers of toxicoscordion paniculatum are formed of six tepals, in two groups of three - outer alternating with inner, the latter slightly shorter, and clawed. All have a greenish-yellow gland near the base, and are otherwise white. Flowers are attached by stalks of around one inch, subtended by a bract about half this length, withered at the blooming time. The six stamens are exserted, with filaments equal to or slightly longer than the tepals. Filaments are usually straight, and they are thickened towards the base. At the center of the flower is a green pistil topped by three styles.

The inflorescence is usually a panicle, but may also be a raceme; it contains between 10 and 80 flowers, well-spaced lower down becoming dense near the top. Stems are hairless. The long, narrow, linear leaves have rough, short-ciliate margins. Leaves are mostly basal. 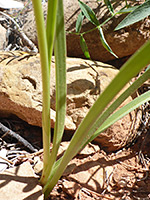