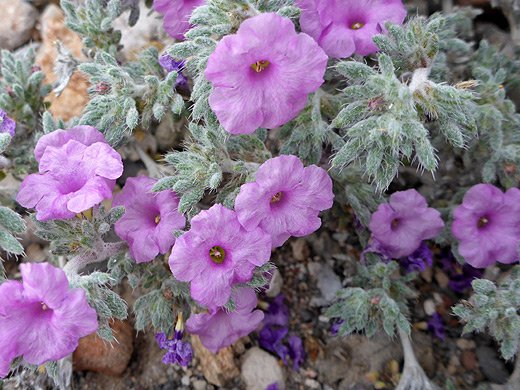 Tiquilia mexicana has the smallest range of the nine US species in this genus, restricted to four counties in far west Texas, centered on the Big Bend region. Stems, leaves and calyces are bristly-hairy; some hairs are short and lie against the surface, others are longer and project outwards. The prostrate stems are woody, the bark whitish towards the base, reddish higher up. Leaves are tightly clustered, all along the stems. Leaf margins are rolled under, giving them a thick appearance.

The relatively large, radially symmetric flowers form from the upper leaf nodes; they have a five-lobed calyx enclosing a thin, yellowish, funnel-shaped corolla tube that opens to five broad, pink lobes, somewhat crinkly in texture. There are no appendages at the base of the lobes. The yellow flower center contains five stamens and a two-lobed style. 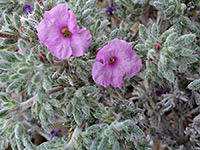