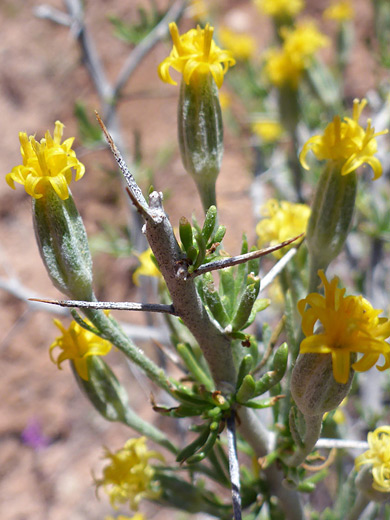 As its common name suggests, tetradymia axillaris is a spiny shrub; the greyish stems, woody with age, bear clusters of small leaves, which tend to wither during summer, beneath which are rigid thorns, brownish at the tip and up to 2 inches long. Stems have an even covering of tomentose hairs, while the leaves are more sparsely tomentose, becoming glabrous with age. Plants produce up to five stems.

Flowerheads are borne singly or in groups of up to three, from the leaf axils, attached by bracted stalks (peduncles) around half an inch long. The involucre is relatively long and narrow, lined by five ovate phyllaries, fused for most of their length. Flowerheads contain between five and seven yellow disc florets, which have five narrow lobes, recurved when mature, and a central column of fused anthers and a branched style.

There are two varieties of tetradymia axillaris: for var axillaris the phyllaries and peduncles are hairless, while those of var longispina are tomentose hairy. 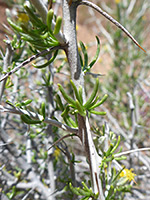 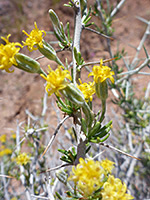