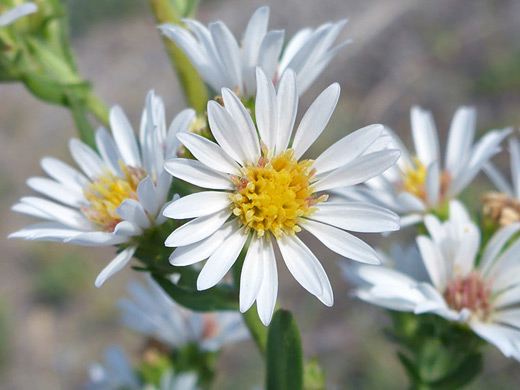 Flowerheads of symphyotrichum falcatum are formed of between 15 and 35 ray florets (generally at least 20), usually colored white, less often pink or pale blue, and about one inch long, around a similar number of yellow disc florets, which become reddish then brown as they mature. Underneath are three or four rows of green (whitish at the base) phyllaries; those lower down are relatively broad, and widest towards the tip, while those above are narrower and more linear in shape. Phyllaries are topped by a tiny spine, and they angle outwards or bend backwards when the flowerhead is fully mature.

The narrow, light green leaves are also usually spine-tipped, and they have a sparse to dense covering of strigose hairs (more evident for leaves higher up the stem), as do the brown or reddish stems. Basal and lower/mid stem leaves are similar in size, while those towards the top of the stem are often slightly longer, but narrower, no more than 0.1 inches across.

Var falcatum is a clump-forming variety with up to ten stems per plant, sparsely hairy, while var commutatum usually has just one stem, and is generally hairier; both are widespread. 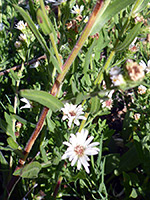 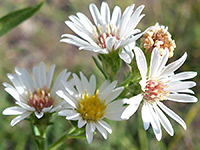