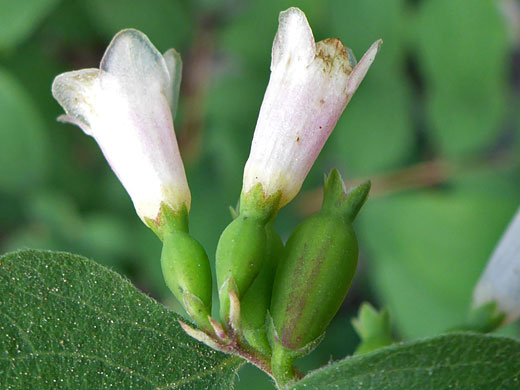 Symphoricarpos oreophilus is quite widespread across the western states, absent only from coastal and desert regions. Plants are freely-branching shrubs, several feet high and wide, bearing round leaves at closely-spaced, opposite intervals. Leaf margins are usually entire but may be finely toothed. Upper leaf surfaces are relatively dark green while lower surfaces are lighter in color. Leaves in the opposite pairs are often unequal in size.

Flowers form as terminal clusters; they have a funnel-shaped corolla, up to 0.7 inches long, all-white or flushed with pink, with five small, rounded lobes at the tip. The green calyx is much shorter than the corolla, and is divided about half its height into triangular lobes, while underneath is the egg-shaped ovary. Fruits are round white berries, usually containing two nutlets. 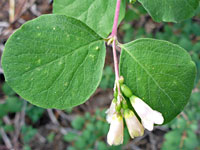