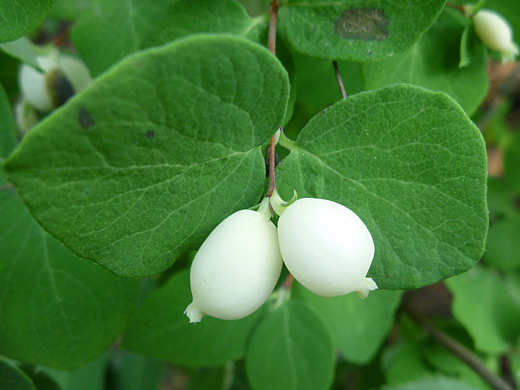 Symphoricarpos albus is a tall, shrub-like species; the woody, leafy, hairless branches spread from a thick, central trunk, and plants can form large, dense colonies. Lower stems have shredding bark. Flowers are produced in small clusters at the tip of the stems and the upper leaf nodes; sometimes containing as many as 15 heads but usually somewhat fewer. Flowers have a rounded, white or pinkish corolla that opens slightly to several pointed lobes, and contains white hairs, stamens and a style, all held within, not protruding. The fruits are initially green but pure white when ripe, similarly shaped as the corolla but twice as large (half an inch long). 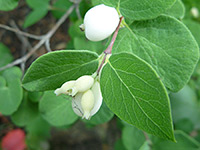