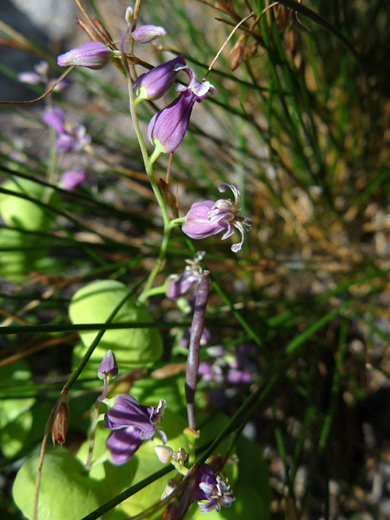 Streptanthus tortuosus is found over a wide range of elevations, from 600 to over 13,000 feet, generally in wooded areas or on rocky slopes above the timberline. Several aspects are variable, and at least six varieties have been proposed.

All parts of of the plant are hairless. Stems may be single or branch a few times from the base; they bear distinctive, ovate or heart-shaped leaves, with lobed, clasping bases. Basal leaves have short stalks. All leaves are light green, becoming yellowish later in the season.

The inflorescence is an elongated cluster, the flowers quite well-separated, and concentrated on one side of the stem. Flowers have a purple or grey/green, urn-shaped calyx, the sepals about half an inch long and fused for most of their length. Four narrow petals protrude a little way above the narrow opening at the top of the calyx; they are also half an inch in length, curved backwards, colored variously purple, yellow or whitish. 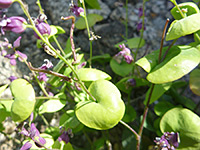