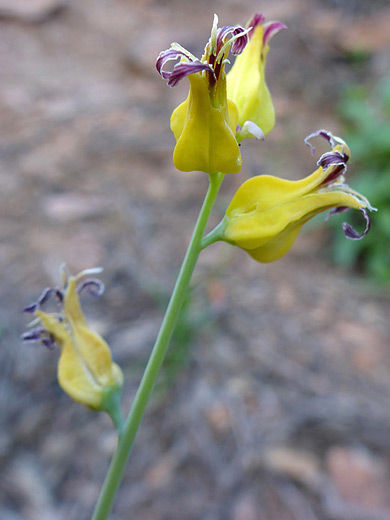 All parts of streptanthus carinatus are hairless. The stems and to a lesser extent the leaves are grayish green in color. Stems are branched, mostly from the base, to a height of around 2 feet. Basal leaves are somewhat different to stem leaves; the former have short stalks and usually are deeply lobed almost to the midvein, with irregularly toothed or lobed edges. The terminal lobe is the largest. Stem leaves are clasping, generally lanceolate in shape, and also lined with a few large, irregular teeth. Upper stem leaves are smaller, with entire margins.

The unusual flowers are formed of four sepals, wider at the base and fused, to create a bell-shaped calyx, and four smaller, recurved petals which have wavy fringes along the margins. Just visible in the flower center are one style and six stamens, in three unequal-length pairs. Fruits are green, flattened pods up to 3 inches long, pointing vertically upwards.

There are two subspecies, easily distinguished by the sepal color. Ssp arizonicus has yellow or white sepals, white petals with purplish veins, and a higher likelihood of leaves having entire edges. Ssp carinatus has purple sepals, and purple petals with white margins. The former is found between south Arizona and south New Mexico; easterly plants tend to have yellow sepals while to those the west are more usually white. Ssp carinatus is more common further east, its range extending into Texas. 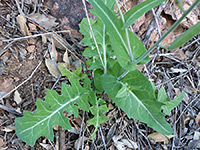 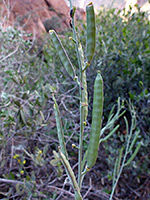 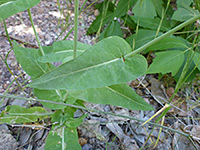 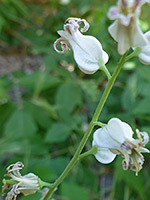 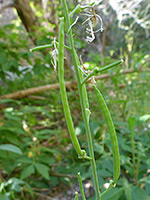 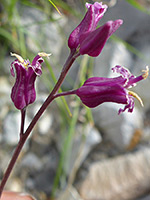 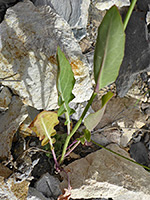 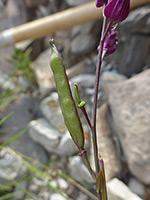 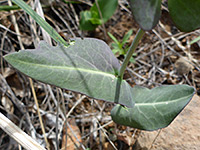 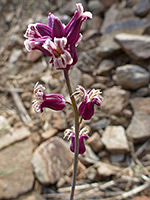 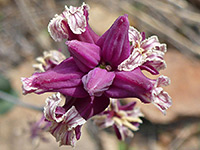