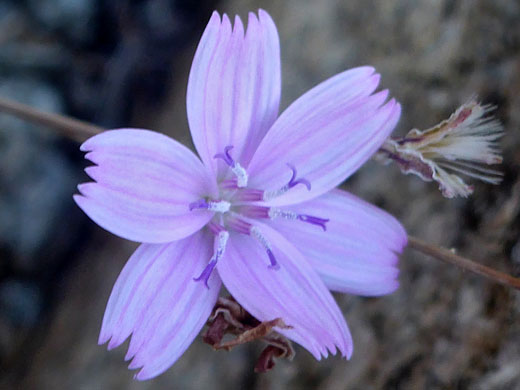 Stephanomeria exigua varies greatly in height, from just a few inches to over five feet, reflecting the wide range of habitats and elevations it occupies; it is most widespread around the coastal plains and ranges of southern California, but also common in many other locations, eastwards to the west side of the Rocky Mountains.

Basal leaves, withered before flowering, are pinnately lobed, or coarsely toothed (runcinate), while stem leaves are much smaller, bract-like. Stems may have a sparse covering of short hairs but are otherwise glabrous. Flowerheads are attached by short stalks, bearing a few bracts, while at the base of the involucre are more bractlets, the calyculi. There are usually from four to eight (ligulate) florets, with a white to purple anther column, whitish style and branched, purple stigma.

Five varieties are recognized; four (coronaria, macrocarpa, carotifera, deanei) are found only in California, while the other, var exigua, is much more widespread, and characterised by glabrous or only sparsely glandular stalks, appressed bractlets and clustered (rather than single) flowerheads. 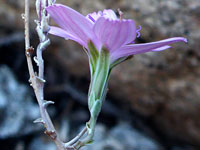 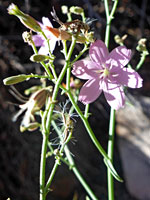