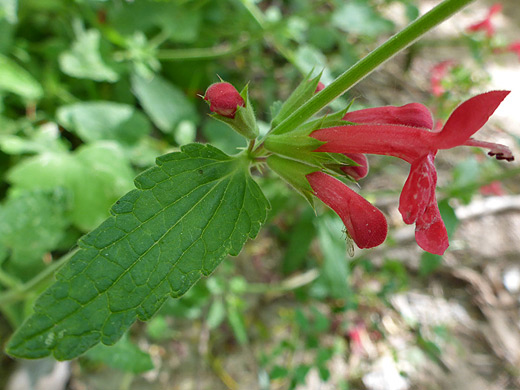 Stachys coccinea is easily identified since this is the only one of the approximately 40 stachys species in the US to have red flowers. The tubular flowers form in whorls of up to six, held on short, thick stalks just above the leaf nodes on the upper portion of the stem. Flowers are subtended by leafy bracts, which become progressively smaller higher up the stem.

The corolla projects from a symmetric, green, five-lobed calyx, rather wider than the base of the tube. Flowers are two or three times as long as the calyx - up to one inch - and have a hood like, downwards-facing upper lip and a recurved lower lip, partly divided into three lobes. The inner surfaces of the corolla have a faint, lighter mottled pattern. The corolla contains four stamens - red filaments topped by dark purple anthers, these partly concealed by the cup of the upper lip.

Stems are square in cross-section and have a sparse covering of rough, spreading hairs. Leaves are relatively large, crossed by prominent veins, branching from the base. Lead edges are lined by large, rounded teeth. 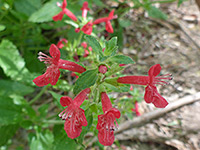 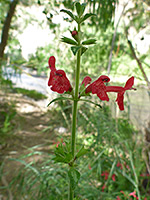 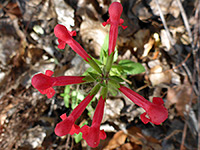