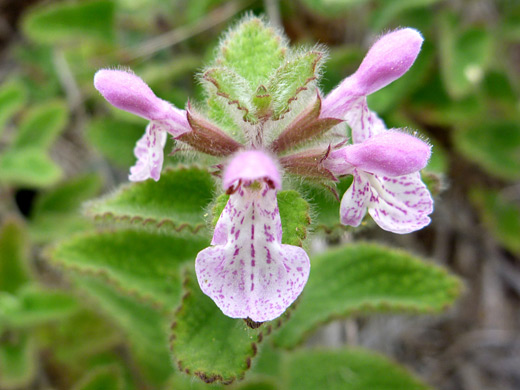 Leaves of stachys ajugoides are quite thick, covered on both sides by relatively long, silky white hairs, and with a rounded tip and large, regularly-spaced teeth along the edges. Leaf margins are often reddish-purple. Stems tend to be leaning or arching, and they also have a covering of soft hairs.

Flowers form at the upper leaf nodes, in whorls of between three and six heads. The reddish, narrowly bell-shaped corolla is hairy, and opens to five triangular lobes, their length rather less than the fused portion of the tube. The inside of the corolla is mostly white, or very pale pink, but marked by lines and flecks of dark pink. The outer surfaces are a more even pink. The corolla is divided into two lobes, both somewhat pouched towards the tip. The upper lobe is straight while the lower lobe is bent back by 90 degrees or more. Inside the corolla tube is a ring of slanted hairs. 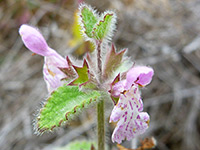