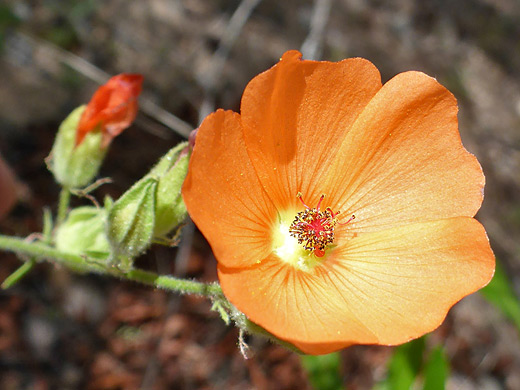 Sphaeralcea rusbyi plants produce one to several stems, ascending to erect, typically around 2 feet high. Leaves and stems have a sparser hair covering compared to many other sphaeralcea species, and can become almost hairless with age. The leaves are lobed, with smooth or crinkly edges; larger leaves have a terminal lobe and two pairs of side lobes towards the top, and a pair of longer lobes at the base, themselves divided into two, one section angled backwards.

The inflorescence is a narrow, elongated cluster. Flowers have a five lobed calyx, somewhat more hairy than the leaves, and five broad, red-orange petals, shallowly notched at the tip. The calyx lobes are about three times as long as the calyx tube, and triangular to lanceolate in shape. The flower is centered on a group of short stamens, with thin, red filaments and brownish-yellow anthers.

There are three subspecies of sphaeralcea rusbyi: ssp eremicola found only in California, ssp gilensis, which has larger flowers, less lobed leaves and denser hair covering, and ssp rusbyi. 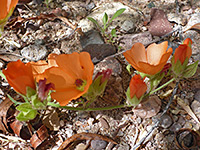 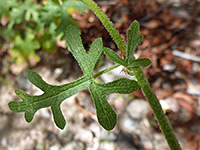