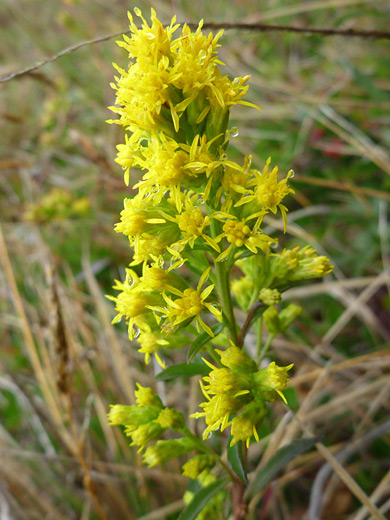 Solidago californica is quite a widespread species, found in most parts of California, and adjacent Oregon and Nevada. Stems and leaves may be hairless, or have a sparse to dense covering of short, soft hairs. Leaves are lined by small teeth along the edges, mostly towards the tip; they grow around the base, and (becoming progressively smaller) higher up the stem.

The inflorescence is an elongated cluster, predominantly one-sided, and somewhat wider at the lower end, containing several dozen small yellow flowerheads. These are formed of 6 to 11 thin ray florets and 6 to 17 disc florets. Rays are short, less than a quarter of an inch. Phyllaries are in several rows; those in the uppermost series have a few strigose hairs. Phyllaries are not resinous. 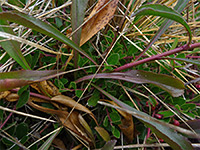